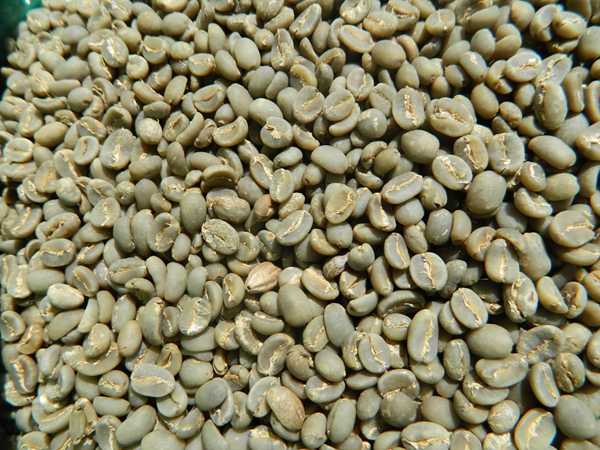 Green Coffee Beans are the way to go if you want an smooth aromatic and visual experience of ‘Tea’ while enjoying the ‘Kick’ of caffeinated dark roasted coffee beans.  I took an inexpensive coffee grinder for about five spins with this green coffee bean (very hard bean) and on my single cup coffee maker received a splendid cup of java.  The drinking has you in a trance because you cannot believe it is coffee versus a cup of tea.

Within a couple days the Coffee Bean Corral delivered via UPS this delightful green bean to my office.  It comes is reusable plastic sealed bags that are well labeled.

Java Taman Dadar comes from family-owned farms located near the villages of Curah Tatal and Kayumas on the island of Java, Indonesia.

In the 17th Century Java coffee was first cultivated in low lying areas, but by the late 19th Century coffee leaf rust had destroyed production, forcing new coffee cultivation into the highlands where high altitudes and volcanic soil provide perfect growing conditions. Smallholder organic coffee production is atypical of the region which is dominated by large government run coffee estates established by the Dutch in the 18th century.

First developed by early Dutch colonists, Java was one of the first coffee-producing regions outside of East Africa and Arabia. Highly sought-after due to stricter grading standards than those of non-governmental estates, Javas are excellent coffees for blending with milder Central Americans or Colombians, and of course as a component of the ubiquitous Mocha-Java blend in conjunction with a Yemen or Ethiopian Mocha.

The vast majority of coffee production on Java is controlled by the Indonesian government. However, there are smallholder farmers on the Ijen Plateau in eastern Java that operate independently. This Taman Dadar coffee (meaning flower garden), comes from the villages of Curah Tatal and Kayumas. While the government estates practice mono-cultural farming, the Taman Dadar farmers do intersperse Erythrina, Albizia and Leucaena trees for shade and as a source of food for their livestock, which provide natural fertilizer.